Learn now Blackjack rules to beat the dealer. The basic strategy card chart gives you an edge against the casino dealer, but what about your online opponents? You better practice your 21 card counting strategy!

Blackjack is а truly illustrious casino table game! Its roots can be traced back to the 1760s in France, where it is called Vingt-et-Un (French for 21). Today, Blackjack is arguably the most popular gambling card game with more players than craps, roulette, and baccarat combined.

Never played Blackjack before? Here you can learn the fundamentals of Blackjack.
Let’s get started by learning how to play the game!

The rules of the Blackjack game are relatively easy to learn. Each player makes a bet that his hand would be better than the hand of the dealer.

The object is very simple: to achieve a total that is greater than that of the dealer, and which does not exceed 21.
The secret is: to learn basic strategy for hitting, standing, doubling down, and splitting pairs.

The game should be played with a set of cards that contains 6 decks. Each deck should be a standard French pack (Spades, Hearts, Diamonds, Clubs) with 52 cards with each denomination assigned a point value.

The values of the cards:

Blackjack is a combination of an Ace and any 10-points card.

Play begins when a player places a bet by stacking a chip or chips in the betting square on the table. After all bets have been placed, each player and the dealer are given two cards and all player cards are dealt face up. One of the dealer cards is dealt face up. The face down card is called the “hole card.” Play begins with the player to the dealer’s left.

The play actions available are as follows:

– Stand: If a player stands, he elects to draw no more cards.

– Hit: If a player hits, he draws another card or cards in hopes of getting closer to 21. If the player’s total exceeds 21 after hitting, known as “breaking” or “busting”, he loses the bet.

– Double: If a player doubles his bet, he gets one, and only one, more card regardless of its denomination.

– Split: If a player has two cards of the same denomination, then he may double his bet and separate his cards into two individual hands. The dealer will automatically give each card a second card. Then, the player may hit, stand, or double normally. However, when splitting aces, each ace gets only one card. Sometimes doubling after splitting is not allowed. If the player gets a ten and ace after splitting, then it counts as 21 points, not a blackjack. Usually the player may keep re-splitting up to a total of four hands. Sometimes re-splitting aces is not allowed. 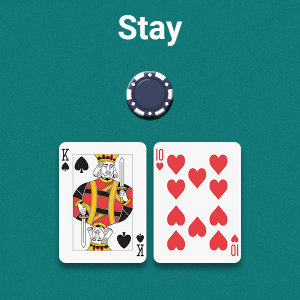 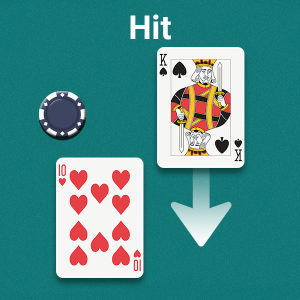 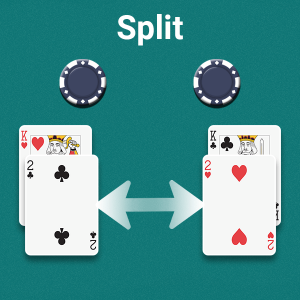 – Surrender: The player forfeits half his wager, keeping the other half, and does not play out his hand. This option is only available on the initial two cards, and depending on casino rules, sometimes it is not allowed at all. After each player has had his turn, the dealer will turn over his hole card. If the dealer has 16 or less, then he will draw another card. A special situation is when the dealer has an ace and any number of cards totaling six points (known as a “soft 17”). At some tables, the dealer will also hit a soft 17.

If the dealer goes over 21 points, then any player who didn’t already bust will win. If the dealer does not bust, then the higher point total between the player and dealer will win.